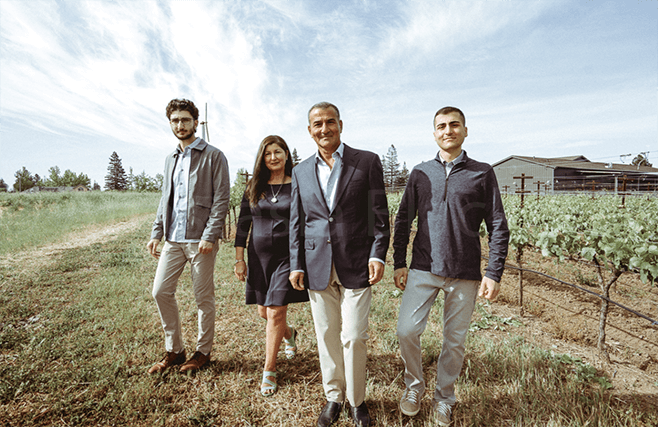 Welcome to our family.

Like many others, family means everything to us. They are your stories, your support, your closest connections. For some it's possible to stay close to your family, live nearby, grow up together. For some it's not. This is our story...

Searching for a new life, we moved to America, leaving behind our roots and those closest to us. It forced us to reach out and make connections with people, to create a new community we could call family.

It was a great lesson to learn, because it taught us that strength comes from togetherness. Life is about building relationships and turning connections into friendships. The friends we have gathered over time, the associates we have collaborated with at work, the partnerships we have formed in the pursuit of our passions, we consider them all family.

Now on our journey to bring these wines to life, we can happily say our family has expanded.

Our hope is that as you enjoy our wines, you also broaden your circle and bring new friends into your family. Togetherness is what makes us all stronger.

Early on in life, Sam learned the value of working hard and building relationships. At the age of 9, he moved with his family to America. His parents and four siblings arrived with nothing, in fact they owed $200…but his father possessed a determination to work hard, a belief in the importance of family and an understanding that strength comes from building mutually beneficial relationships with others.

“My father got me to understand how you dedicate yourself to hard work. If you want something, you must go after it and never give up. Nobody’s going to give it to you.”

When he was 19, Sam risked it all to follow his dream to become an entrepreneur, founding his first business, Atlas Oil. The trigger was the word NO. Sam doesn’t take no for an answer, rather it ignites him to take action and overcome.

From the humble beginnings of one truck bought on credit, he built Simon Group Holdings, a business that thrives on collaboration and innovation, and now employs many people across multiple states. At the foundation of his success is the belief that strength comes from togetherness - whether that relates to building a business or to the bonds that tie family and friends. It’s by surrounding yourself and collaborating with people that amazing things can happen. And there is no better example of this than the story of meeting his wife, Nada. 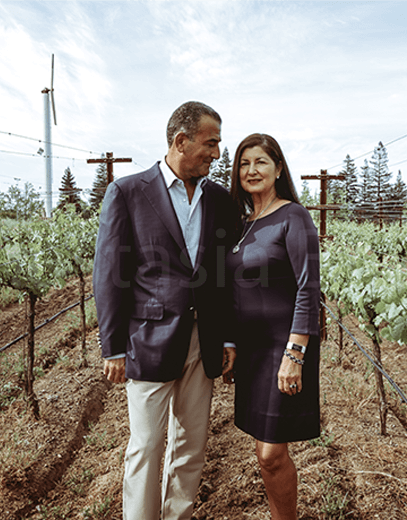 Searching for a world-class salesperson he met Nada, who initially refused his offer to work at his company. True to character, he refused to take no for an answer, persistently continued, and eventually convinced her to join him at Atlas Oil. Business flourished, so too did their personal relationship, and seven years later they married. She has been his equal ever since, both as business and life partner, and mother to their twin boys, Peter and Michael.

His long-term love of wine was ignited many years ago, driven by an occasion more memorable than the wine itself. As fortune would have it, he was introduced to wines of exceptional quality, but what remains in his memory were the people he enjoyed those first glasses with. From that day on he learned the magic of wine was in building bridges, making connections, and creating moments together that change us forever.

He furthered his passion for wine, joining the Napa Valley Reserve. Through his membership he became an avid learner and appreciator of the nuances of wine, connecting with leaders in the industry, building many enduring friendships along the way. As his appreciation of wine grew, Sam became deeply interested in the winemaking process, venturing to make some of his own small-lot vintages to share amongst his close family and friends. Creating exceptional wines for a wider audience has always been his vision, which is now a reality.

Always a keen eye for talent, when Sam crossed paths with Maayan, he knew he was the right person to spearhead his new venture into winemaking. As immigrants they connected over their past family histories; the challenge of starting from scratch in a new country, respecting the importance of working hard to make the most of the opportunities America affords, and knowing the strongest relationships are built on mutual respect. Together they embark on a new friendship, collaborating to craft some of the most exquisite wines from the Napa Valley region.

Welcome to Simon Family Estates, wines created through determination and the spirit of togetherness.